Member of Parliament, Mikko Kärnä representing the Centre party is used to raise reprehension with his provocative updates in social media. Yesterday he chose a photo with pretty hostile caption: ”I found a solution for the wolf problem.” In the picture Kärnä is handling a machine gun. 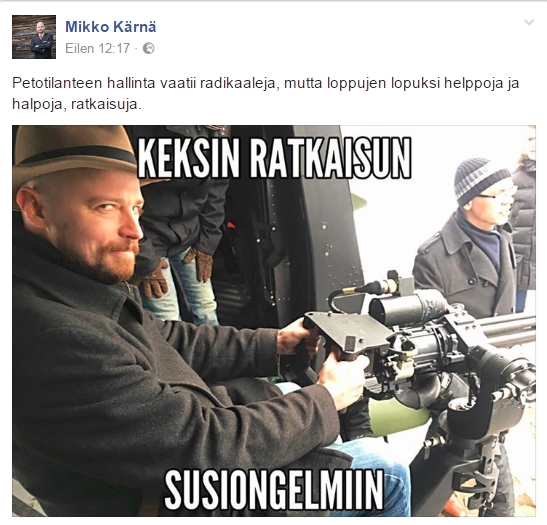 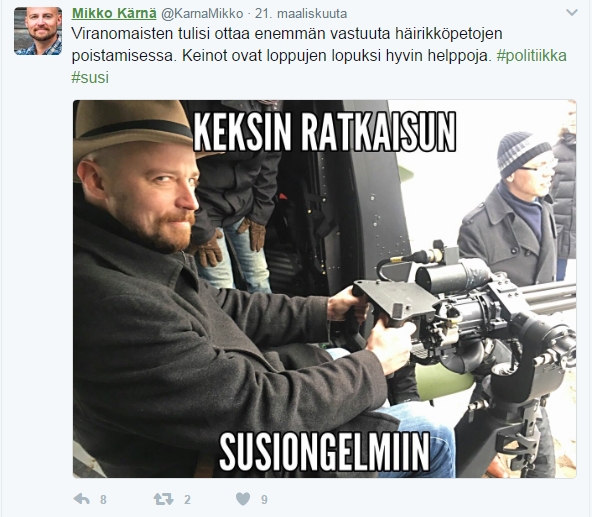 The same theme is published in his tweet, quoting: ”The authorities should take more responsibility with eliminating trouble-causing beasts. Finally, the solutions are very easy.”

The recent estimate was given by the Natural Recourses Institute in March 2016. There were only 200-235 wolves in Finland. During 2014-2016 as many as 106 wolves were killed by human caused reasons. Last winter 19 breeding individuals were killed during the management hunt.

Now there are already 55 dead wolves for this hunting season.

Instead of recognizing the diversity of nature, and giving the value for living creatures, MP Kärnä is going cheap. The causes for wolf-conflict in Finland are obvious. Our politicians are part of the it, with the only solution: killing. They maintain and agitate hatred towards animals with selfish motives: collecting votes.

Military airplanes were used for killing wolves in Finland just before the World War II, 1939 and after it: 1949. This kind of hatred towards  living creatures is more dangerous and more frightening than any animal could ever be.