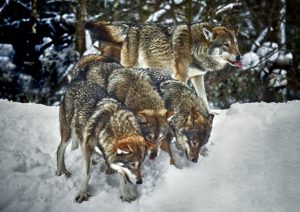 The Ministry of Agriculture and Forestry gave a new commandment of quota for hunting wolves. The new quota is 53 wolves outside the reindeer husbandry area during the two next hunting seasons 2016-2018. The Ministry decided to rice the quota with 13 wolves.

According to the estimate: there is 200-248 wolves outside the reindeer husbandry area. If the quota is filled, the wolf population decreases about 21-26%. The quota is not an aim.

The commandment will come into force in 28th December 2016. The licensed hunting is able to start flexibly right after the permission. This makes possible to monitor the total number of killed wolves and hunted breeding females. It also helps the future decisions.

The quota considers also (outside the reindeer husbandry area) all the hunted wolves with damage-based licenses, police orders and killed in traffic accidents, or illegally hunted wolves. Especially the Finnish Wildlife Agency will monitor the number of killed breeding (alpha) females.

During the last two hunting seasons 106 wolves was killed. The new quota for 2016-2018 equals with that number. Since 1st of August, totally 17 wolves has been killed already, so the total number of dead wolves will arise as much as 70 wolves. It is close enough the mortality of the last year: 78 wolves, which the Ministry found too large!

Can anybody use a calculator in the Ministry of Agriculture?