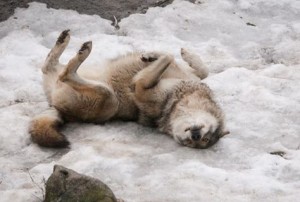 The debate around wolves, churning on the internet has become more brutal and abusive in 10 years, says Jukka Bisi, the Manager of Wildlife Economy of State Forest Enterprise (Metsähallitus). There is so much deliberately misleading disinformation about wolves that it is already a problem considering the management and conservation of the species.

On the other hand problems concern authorities who are responsible for the wolf policy and the research institutes producing information about wolves.

– Citizens dispute the official knowledge after reading disinformation, which is partly inflicted on purpose and partly associated with emotions, says Bisi.

For example there was a rumor in the social media in the end of the year, claiming that there was a person injured by a wolf at Loppi. According to the police, the story was a canard.

On 2014 the State Forest Enterprise founded an Online Game and Fisheries Warden to follow conversation and recognize crimes concerning wildlife and fisheries. After a couple of years experiment, the State Forest Enterprise admitted that the job was too much for a single employee. Nowadays these tasks are shared by 12 wardens. The official annual report will be ready soon and it contains some observations from the social media.

Jani Pellikka, a senior researcher of the Natural Resources Institute of Finland describes: a typical questionable news about wolves is something where a person has seen an animal or tracks near a settlement. An interpretation of these observation(s) is a wolf.

– There is a possibility, that the animal is a wolf, but without snow no-one can ensure that observation. We have this kind of news coverage, says Pellikka.

Pellikka has been conducting research of the outcomes of the wolf-critical organizations in Finland. In his opinion it is difficult to draw the line between the false and true information.

– There are many who claim to know the truth about relations between citizens and wolves, but it is rhetorical means. They might think, that the reason behind differences is the other participant ”does not know what I know”, he says.

According to Pellikka, it is difficult to estimate, how much intentional false information is disseminated in the internet.

– The population estimate is an example of a discussion which is loaded with different numbers.

The official population estimate is produced by the Natural Resources Institute of Finland. According to Pellikka, the researcher in Finland have not been keen on taking role in correcting false news.

– Researchers are easily driven into the wolf debate and convicted as stakeholders, he says.

Pellikka says, that there is a small, active and publicity seeking wolf-critical network in Finland. The debate is particularly heated in some Facebook groups. As seen in general political debate, the social media has also shored up the wolf debate.

– We have not yet analyzed if the social media has caused any isolation considering the wolf discussion, he says.