Different functions and licensed hunt during 2015-2016 is a map presentation. Here’s a ”users manual” for symbols and translation from Finnish to English. 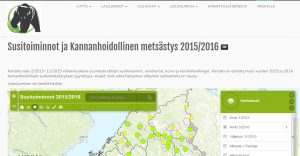 The map is based on the Natural Resources Institute Finland’s estimates on how many wolves there are in Finland 2015 and 2016. In 2015 the Ministry of Agriculture updated the wolf management plan. According to the plan the Ministry set a two-year experiment of licensed hunt, cull. First season February-March 2015 they authorized a hunt of 29 wolves. That year 17 wolves were shot. Next year 2016 the Ministry allowed the hunting of 46 wolves and 43 of them were shot.

Estimates of wolves in Finland:

You can choose the layers from ”Karttatasot” section. If you click the picture, you can see it larger. 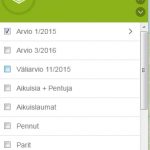 Arvio= estimate. Arvio 1/2015 was a base for licenses during the first season and was given in January 2015. Green stickpins are pairs and green pushpins are packs. Grey pins are packs on the Russian border. Half of those wolves are estimated in the Finnish wolf population. 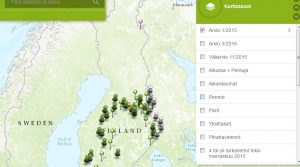 Väliarvio 11/2015 was given before the second hunting season in November 2015. There are pink and green balls, and the number of individuals is uncertain.

Arvio 3/2016 was made after the hunt, in March 2016. Yellow balls are pairs and green balls are packs. Grey balls are again common packs with Russia. If you click the ball on the map, you’ll have the number of individuals in the pack. 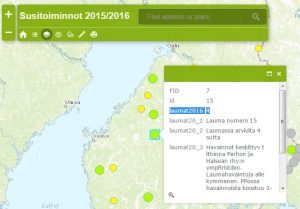 The Large Carnivore Contact persons (set by the Finnish Game Center) observe all the large carnivores (bear, lynx, wolverine and wolf) in Finland. They record all the tracks, sighted animals and pictures taken with hunting cameras in a web application called: TASSU (means ”PAWS”). These observations are the main source of official estimation of packs and pairs in Finland. Single information is not available for the public.

These are all the observations between February 2015 and November 2015:

If you click the ball, you’ll have this information:

Tuotantoeläinvahingot= damages to livestock. If you click the brown pin, you’ll have more information.

Rk-RHY = Game Center and all the Game management associations in Finland.